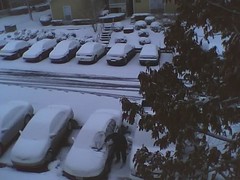 Woot. There is obviously some conditioned response in loving snow days, but also there is something just beautiful in snow. The HR guy at work pretty much said that if there was snow on the ground then the office will be closed so I get a snow day and a new president. I am going to make myself some nice warm oatmeal and enjoy this.

“So comes snow after fire, and even dragons have their ending.” J.R.R. Tolkien

"“How did it happen that their lips came together? How does it happen that birds sing, that snow melts, that the rose unfolds, that the dawn whitens behind the stark shapes of trees on the quivering summit of the hill? A kiss, and all was said.” Victor Hugo

“Getting an inch of snow is like winning 10 cents in the lottery.” Bill Watterson

“Kindness is like snow - it beautifies everything it covers”

“There is nothing in the world more beautiful than the forest clothed to its very hollows in snow. It is the still ecstasy of nature, wherein every spray, every blade of grass, every spire of reed, every intricacy of twig, is clad with radiance.” William Sharp

"Announced by all the trumpets of the sky,
Arrives the snow, and, driving o'er the fields,
Seems nowhere to alight: the whited air
Hides hills and woods, the river, and the heaven,
And veils the farmhouse at the garden's end.
The sled and traveller stopped, the courier's feet
Delayed, all friends shut out, the housemates sit
Around the radiant fireplace, enclosed In a tumultuous privacy of storm. " Ralph Waldo Emerson

"When I no longer thrill to the first snow of the season, I'll know I'm growing old. "

We have a new president. He is a geek president, He has called on many with hope and yes he is our first black president. There is history in that. That is not why I think he is great though. As Helen Keller once put it "There is no king who has not had a slave among his ancestors, and no slave who has not had a king among his." I think he is great at the end of the day because he seems to believe that we can do something. He brings a sense we can change the world a little. If you don't agree with his politics that is fine. One of the great things about our country is we don't have to agree. We are sort of built on the notion we can politely disagree and still be a people and still be friends. Even if you don't care for his politics I hope your finding something good in all of this.

One last thought that occurred to me today.

It is the great joy of the world that there is change. In change and growth we prove we are better than history says we can be. Glorious.

And now back to watching the winter wonderland outside my window.
Collapse