caudelac (keep in mind that this is a re-post, and thus some of the statements herein represent the original poster, more than myself. That said, I think that it is important to get these things out and said, better than via a link): 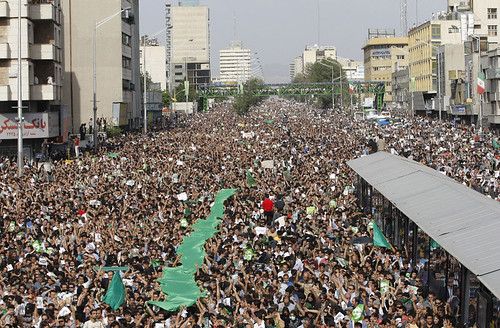 If you are reading this right now, you have more luxury than someone in Iran could ever hope for right now. If you are watching TV or a video on youtube, updating your status on Facebook, Tweeting, or even texting your friend, you are lucky. If you are safe in your home, and were able to sleep last night without the sounds of screaming from the rooftops, you need to know and understand what is happening to people just like you in Iran right now. 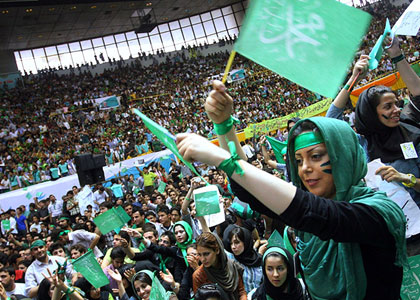 They are not the enemy. They are a people whose election has been stolen. For the first time in a long time, a voice for change struck the youth of Iran, just as it did for many people in the United States only seven months ago. Hossein Mousavi gained the support of millions of people in Iran as a Presidential candidate. He stands for progressiveness. He supports good relations with the West, and the rest of the world. He is supported with fervor as he challenges the oppressive regime of Mahmoud Amedinejad.*


On Friday, millions of people waited for hours in line to vote in Iran's Presidential election. Later that night, as votes came in, Mousavi was alerted that he was winning by a two-thirds margin. Then there was a change. Suddenly, it was Ahmedinejad who had 68% of the vote - in areas which have been firmly against his political party, he overwhelmingly won. Within three hours, millions of votes were supposedly counted - the victor was Ahmedinejad. Immediately fraud was suspected - there was no way he could have won by this great a margin with such oppposition. Since then, reports have been coming in of burned ballots, or in some cases numbers being given without any being counted at all. None of this is confirmed, but what happened next seems to do the trick.

The people of Iran took the streets and rooftops. They shout "Death to the dictator" and "Allah o akbar." They join together to protest. Peacefully. The police attack some, but they stay strong. Riots happen, and the shouting continues all night. Text messaging was disabled, as was satellite; websites which can spread information such as Twitter, Facebook, Youtube, and the BBC are blocked in the country. At five in the morning, Arabic speaking soldiers (the people of Iran speak Farsi) stormed a university in the capital city of Tehran. While sleeping in their dormitories, five students were killed. Others were wounded. These soldiers are thought to have been brought in by Ahmedinejad from Lebanon. Today, 192 of the university's faculty have resigned in protest. 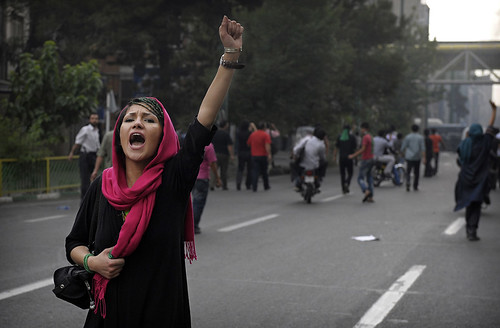 Mousavi requested that they government allow a peaceful rally to occur this morning - the request was denied. Many thought that it would not happen. Nevertheless, first a few thousand people showed up in the streets of Tehran. At this point, it is estimated that 1 to 2 million people were there. (Personal note: I've heard reports that it might have been 3 million-- but nothing is confirmed at this point). Mousavi spoke on the top of a car. The police stood by. For a few hours, everything was peaceful. Right now, the same cannot be said. Reports of injuries, shootings, and killings are flooding the internet. Twitter has been an invaluable source - those in Iran who still know how to access it are updating regularly with picture evidence. Women are being brutally beat.

Tonight will be another night without rest for so many in Iran, no older than I. Tonight there is a Green Revolution. 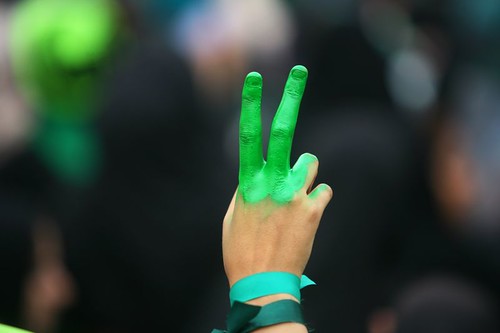 دنیارابگوییدچطورآنهاانتخاباتمان دزدیده اند
Tell the world how they have stolen our election.

(original post by [info]one_hoopy_frood here - please repost!)
*ETA: I'll comment that, as regards to how Mousavi will get on with the West, nothing is firm or certain. However, in the likelihood that the incumbent cheated, it really doesn't matter what the numbers say-- he ought to be ousted for that criminality. If you would have won, and you cheat anyway, you still ought lose.

There was apparently an article in Wirdec about our game and our experience with the ESRB. It is a pretty cool read.

"In Fallen Earth, an MMO where players struggle for survival in a no-holds-barred, post-apocalyptic world, the developers thought that they could never have enough cadavers.

But they were wrong. You can have enough dead bodies — the Entertainment Software Rating Board told them so. The independent body that assigns game ratings in the U.S. ruled that Fallen Earth’s piles of corpses were just too much for a Teen rating, says the developer of the upcoming PC game. The game has received a Mature rating as a result.

“There’s one town that’s literally hung with 200 corpses,” said the game’s lead designer Lee Hammock while demoing the game at E3. “(The ESRB) was like, ‘That’s too many corpses. You hit your limit.’”
Collapse